Home » Green Tea » What Leaves Are In Green Tea ? (What Your Fave Tea Is Made Of)

Wondering what kind of leaves are used in green tea ? That's a common question, given how people talk about tea like we all know what goes in it.

Once you do find out, it's kind of simple and makes you go "Oh...", and lots of things will fall into place.

So let's see what leaves are used for green tea, and how that matters. 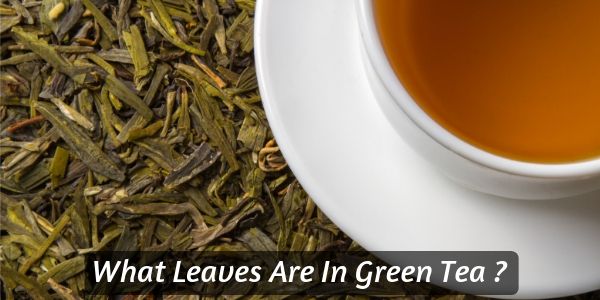 So what leaves are in green tea ?

Green tea uses the leaves of the Camellia sinensis plant. That is the name of the ancient Asian (traditionally Chinese) tea plant that everyone's so in love with.

The Camellia plant's leaves are used for several types of tea, and green tea uses the youngest leaves that have just unfurled from a bud. Traditionally, green tea uses two leaves and a bud.

Now, there are some green teas that use Camellia assamica leaves. That's an offshoot of the original tea plant, and is most commonly used for black tea (Assam tea).

So, your green tea is a very specific one. I fact, all tea that are 'true teas' are very specific. This is because they are all made from the same tea plant, and using different leaves and processing them a bit differently results in a different tea.

Green tea's leaves are young, picked in the Spring

It's the youngest ;eaves, that have already unfurled from their buds, that are used for green tea.

The leaves need to be tender, bright green, and preferably also have a bud alongside them.

This usually means that the tip of the young twig is what is used, since that is the growing point of the tea plant.

The leaves there are younger, and provides the flavor wanted.

If you were to use older leaves, you'd get a bit less caffeine in the plant, and also a different flavor. In fact, with each season the tea plant changes its flavor, become blander and more flat as winter approaches.

The way the tea plant is grown protects it from the harsh sun, though it does need some direct sunshine, especially in the morning. Too much sunshine in the hot months can burn the plant and wither it.

So, the leaves used for green tea are young, two leaves and a bud, and mostly shaded.

The absolute best green tea leaves are completely shaded once the plant has grown, and they are used for making Matcha and Gyokuro tea. Both teas are Japanese green teas.

You'll understand why that matters when we get to how the leaves are processed. 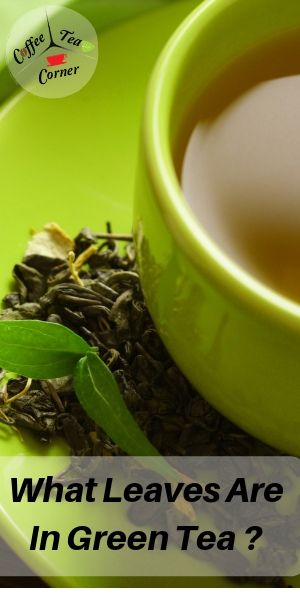 Green tea as we know it in the West is mostly Chinese green tea. This dates back the the early ages of imported tea (centuries ago), when the Chinese held the monopoly for the tea trade.

The Chinese used baking and fire-drying methods to cure their green tea leaves.

This meant that the tea leaves were put in ovens and slowly baked at an even temperature, for a few minutes, until they reached the desired oxidation.

Or, in some cases the tea leaves were put in a wok and shaken and moved around until they got the point they could be used.

This usually results in flatter tea leaves, with less of a ribbon-like appearance.

And it also led to the yellowish hue of the brewed green tea. Which is one of the reasons your cup of green tea does not look green.

The true pale green teas are only some specific Japanese teas, and not even those will end up really green.

The Japanese green tea is different because the leaves are steamed, rather than oven-fired. This does not burn the tea leaves, which in turn does not give them a yellowish tinge.

Instead, the brew will retain a greenish hue, as green tea might make one think it should have, given its name.

Now, about Gyokuro and Matcha. Both are made from the exact same green tea leaf, with a few changes.

Both Gyokuro and Matcha leaves are grown completely shaded. this retains much of the caffeine and antioxidants in the leaves. Once the leaves are picked and dried, that's where they separate.

Gyokuro is the plain green tea made from those leaves we just mentioned, and they produce a very vibrant tasting green tea.

Matcha is made from the same leaves, only their tiny veins and stems are cut off, and the remaining parts of the leaves are ground up into a fine powder. Matcha powder, which is going to be bright green.

I know there's big differences between pure green tea and Matcha, but honestly their base is the same, so I've explained both here.

If you're a green tea lover than you know all about its health benefits.

So, you'll be pleased to know that those benefits are only present because of the leaves used, and they way they were processed.

It turns out that only lightly processing the tea leaves retains most of their antioxidants. If you were to process the leaves further, like for an oolong tea, you'd lose some of those benefits.

Because the antioxidants would turn into tannins, which are alright in moderate quantities.

This is why oolong tea has less health benefits than green tea. And why black tea has even less, since the leaves used for black tea are slightly older than those used for green tea.

And they're also much more processed, turning most of the antioxidants into tannins.

So the next time your green tea seems a bit astringent and vegetal, be thankful. It's proof that you've still got all your antioxidants in your cup.

If it tuns too bitter however, there's reasons for that. And if you can't really handle the taste of pure green tea, there are fruits and plants you can add to smooth it out.

If you want to reuse green tea leaves, go ahead. Though you should know that you won't get more than a second steep, which will be much milder in taste than the first one.

The same plant's leaves are used for other teas

I mentioned earlier that green tea leaves come from the Camellia sinensis plant. This is true, and those leaves will be found in other teas as well.

There is this concept of 'true teas'. Meaning the teas that are made of actual ta leaves, and are not herbal teas made of flowers or other plants.

And any other tea made from either the Camellia sinensis plant, or the Camellia assamica plant. Both are tea plants, and both produce teas of each type.

Meaning that even if green tea traditionally uses Camellia sinensis leaves, it wouldn't be a shocker to find an Assamica version. After all, there are Assamica white teas out there, so we might as well find other tea types.

So in a way, all teas are the same, though even slight changes to a tea recipe will yield a different tea type. For example green tea leaves that were processed normally, and then packed for long distance shipping back when the Silk Road was a thing, became Pu'erh tea.

Because the hot weather and the tightly packed leaves would ferment and form a sort of tea brick that got a taste of its own.

Green tea is a favorite among many, either for health benefits or for taste. It's one of the most widely consumed teas in the West, right after black tea.

Which is why we should always be informed about what we're drinking, since we all seem to have such a liking for this brew.