Matcha is quickly turning into everyone's favorite tea now. With such a surge in popularity, its best to know when to drink Matcha, and when to keep away from it.

As you know, Matcha also contains caffeine so we need to be mindful of this, just like with coffee.

So let's get on to the best times to drink Matcha, depending on what you're after. 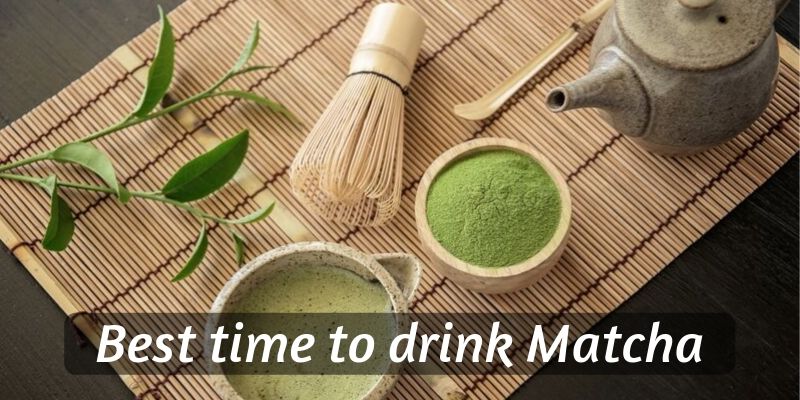 So when should you drink Matcha ?

Matcha contains caffeine, so this should be the first thing we think of when figuring out if we want a cup or not. Drinking a serving of Matcha gives about half the caffeine as a shot of espresso.

It works in a much gentler way than coffee, but it's still caffeine. So early morning instead of coffee, or as a pick-me-up will work just fine.

If you're looking for the health benefits and don't mind the caffeine, then you'll also have to drink it some time before a meal, at least 30 minutes.

Let's take a closer look at each time, and how it affects your body. Matcha is a wonderful drink, but we need to really get to know it.

Drink Matcha in the morning, instead of coffee

Replacing your morning coffee with tea is not unheard of, and there are lots of options out there.

Matcha is one of those options, and it's very reminiscent of an espresso, what with its small serving size and green foam/crema on top. Only it's green, does not take sugar and does not take milk.

As a result of drinking Matcha in the morning instead of coffee, you won't get the jitters that often come with caffeine from coffee.

This is because caffeine from Matcha works like any other caffeine from tea. It bonds with an element called L-theanine, and together they act as a slow-releasing caffeine that gently but steadily wakes you up and keeps you up.

You might think it's not enough. It actually is, since we often tend to drink too much coffee, and our bodies get used to it. A gentle dose in the morning is enough, there's rarely any need to take as much as we usually do.

As a result on L-theanine bonding with the caffeine, your Matcha cup will help you focus better since you're not in overdrive. You'll be pleasantly awake and alert, senses sharpened but still able to focus on one thing.

The energy release is slower, but over a longer period of time with Matcha. It's very much like drinking green tea, only more concentrated.

Drink Matcha during the day, as a pick-me-up

Another time to drink Matcha could be somewhere right after lunch. This is so you can both beat the afternoon slump, and also aid your digestion a little.

If you're drinking Matcha after a meal, it might help the food go down better.

And drinking it during your lunch break will mean you might not be as tired around 2-3 PM, when everyone is always getting a little sleepy and sluggish.

The same energy and focus benefits apply as in the morning, though maybe a bit dulled since the food will make things go slower.

If you like you can drink a cup of Matcha about an hour after eating, so there is very little interference.

But, make sure you get actual Matcha. A Matcha latte will have a much smaller effect due to the sugar and milk added.

If you're sensitive to caffeine or you're on a very tight schedule and need to be able to get to bed early and fall asleep quickly don't drink Matcha too close to bedtime. This means allowing at least 5 hours between your Matcha and when you go to sleep.

When caffeine bonds with L-theanine, it remains in the bloodstream for loner, and as such you need to allow it a few hours to go away if your sleep schedule is fixed.

Drink Matcha before a meal for greater effects

If you're looking for the health benefits, then you're probably going to need to drink Matcha before your meal. Not completely on an empty stomach, since it might give you a bad time.

Well Matcha is a little more acidic than coffee, and definitely more astringent. So you're going to need to grab a small bite if your Matcha is the first thing you drink.

Not too much food, otherwise the antioxidants and nutrients will have a hard time getting past any possible carbs and fats in the meal.

I think the best time to drink Matcha for its health benefits would be between meals. So a couple of hours after breakfast, or after lunch. Or both.

But not close to dinner time, since the caffeine might influence your sleep and keep you up. 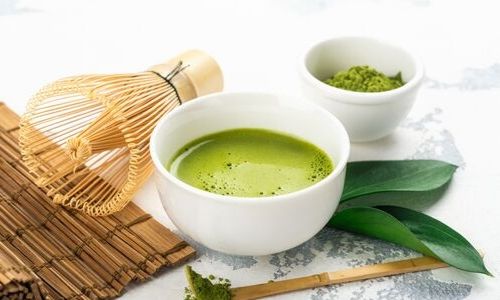 Drink Matcha before a workout for an energy boost

If you're hitting the gym often then maybe drinking Matcha before a workout would be a good idea.

This is because the caffeine in Matcha, as little as it is and bonded with L-theanine, may help you focus and perform your exercises better.

Not just that, but caffeine has been shown to help with fat burning. You'll find it on many health supplements' ingredient list, such as green tea capsules or similar items.

So if burning calories, being more efficient, or lasting longer in the gym is what you're after then give Matcha a thought. It might just be what you need.

And since it comes in such a small serving (about 2 oz/66 ml) it won't interfere with your workout if you need an empty stomach (like for cardio, ab day, or some leg exercises).

Is it ok to drink Matcha at night ?

It really depends on what you're planning on doing at night. If you're working a night shift, then by all means do drink Matcha, as you would also drink coffee to keep you awake.

But if you're planning on sleeping, then don't drink Matcha.

Even though it's got a smaller dose of caffeine than an espresso (about half the caffeine) it's still going to keep you up for a couple of hours.

Some folks have a high tolerance to caffeine, so for them drinking Matcha in the evening or right before bed isn't a problem.

But if you know yourself to be sensitive to caffeine (most folks are) then maybe skip the Matcha and go for a bedtime tea.

How often should you drink Matcha ?

Each person has their own limit.

Ideally we should all consume less than 400 mg of caffeine per day (average healthy adult, not counting pregnant and breastfeeding women).

Seeing as one serving of Matcha provides around 36 mg of caffeine, there's a high chance you can't drink enough Matcha to surpass the healthy limit of caffeine per adult.

But. You should also know that caffeine is also present in soda, most teas, and obviously coffee. You should monitor your overall caffeine intake, not just the Matcha.

And also know that the measurement for caffeine in Matcha is a bit iffy, since there is no way to know exactly how much caffeine is in each esrving until you measure each cup.

It depends on how the plants were grown, how good the soil was, and how much Matcha powder you used.

In short, the 36 mg of caffeine are more of an estimate. So to be safe, keep your Matcha consumption under 5 cups a day.

For pregnant or nursing women, the maximum limit is 200 mg of caffeine per day. So you will need to drink less Matcha than other adults.

Matcha is a wonderful drink, full of health benefits and is a big help for many of us when we need a bit of an energy boost.

But we should also keep in mind that if we want certain effects from Matcha, then we need to be mindful of when we drink it. Hopefully this guide has helped you figure things out, and you know just when to prepare a cup of Matcha.