Home » Green Tea » Where Does Matcha Come From ? (Origin Of Matcha Tea Powder)

If you're wondering where your Matcha comes from, or where this tea powder came from in the first place, you're not alone.

There's some things about Matcha's history and origin that isn't immediately obvious, so let's clear that up. 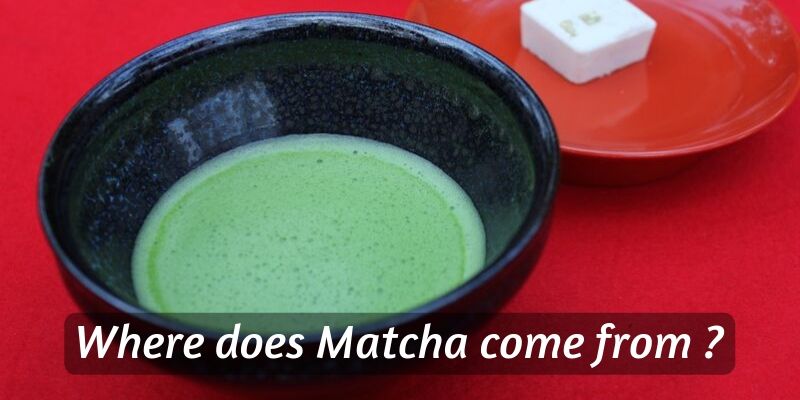 Where does Matcha come from ?

Originally Matcha was a Chinese invention. As in, they were the ones to develop the first form of Matcha, and it was somewhat popular.

This was back in the Tang Dynasty (7th-10th century), and during the Song Dynasty (10th-13th century) drinking Matcha became popular, but it faded after a while.

The habit still remained, enough for a Japanese priest named Eisai to bring the practice to Japan. He'd gone to China as a Buddhist priest in search of enlightenment, and returned to Japan in 1191 to form his own branch of Buddhism.

He brought Matcha along with him, and incorporated it into many of the rituals the religion performed. The preparation of the powdered tea and then the drink was perfected during this time, and it became wildly popular with the Japanese noble class.

Even today Matcha has strong connections to rituals, achieving a Zen state of mind, and generally being mindful of how everything around a person interacts and interconnects.

Currently Japan is the biggest drinker of Matcha, while China is starting to appreciate it again. Other Asian countries are slowly getting into the habit as well.

So is Matcha Japanese or Chinese ?

You could argue for both cases. You could argue that Matcha is Chinese due to them being the first to figure out how to make Matcha and drink it as well.

But they never went very far with it, and it never became as popular as it did with the Japanese.

You could also argue in favor of the Japanese, that although they didn't create Matcha they developed it into an art and made it an essential part of their everyday life.

Personally I think both sides need to be acknowledged, even if it was China that came up with the idea first and then Japan made it popular.

Matcha on the market is pretty mixed

Currently, if you're trying to figure out where your particular pack of Matcha is coming from, you'll find it either from Japan or China. There aren't any countries growing tea plants specifically for Matcha, though this might change in time and it might become a popular item like any other tea.

The country of origin of your Matcha should be clearly stated on your tea pack. Many companies actually bank on their tea being 'authentic Japanese' so you'll often notice the origin country without trying too much.

Wherever your Matcha comes from, the powder should be very 'thin' and light, like talc powder.

It should be bright green, so green it might look fake to an untrained eye. The bright green comes from the overproduction or chlorophyll, and this happens because the leaves grown for Matcha are shaded as they grow.

And although there is a difference between Chinese and Japanese green teas - the former pan-fires the leaves while the latter steams them - the production of Matcha should be exactly the same.

Matcha is linked to ceremony and rituals

As mentioned before, Matcha has become part of Japan's culture and religion.

It was the monk Eisei that brought it to Japan centuries ago, and he made it part of the rituals often performed during a religious event or another.

The famous Japanese tea ceremony is derived from these rituals, and has been established as the way to drink Matcha.

There are two main ways of preparing Matcha - thick (koicha) and thin(usucha).

During the tea ceremony you're meant to drink both versions of Matcha, first the thick and then the thin, along with a sort of sweet.

What transpired into the West was the thick tea (koicha), and that's also the base for a Matcha latte, but made with a lower grade of Matcha known as culinary grade.

Matcha has a fascinating history, and the tea ceremony itself deserves an entire post of its own, so keep your eyes peeled for that one.