Looking to decide between an espresso and a latte ? There are some clear differences between the two, actually they're at almost opposite ends of the coffee spectrum.

Still, let's go through the main differences between a nice hot espresso, and a cup of comforting latte. We'll also take a look at the merits of both these drinks, so you can figure out which you'd like the most.

Onto the differences, then ! 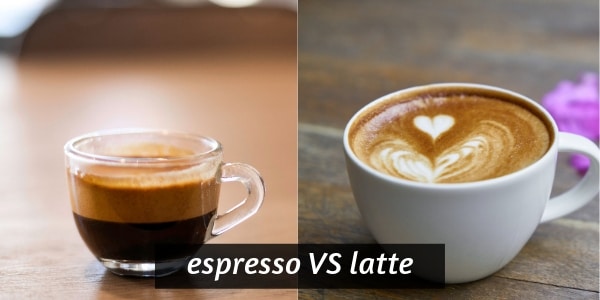 1. An espresso contains no milk

First, let's establish the big, obvious difference. An espresso is a shot of coffee and it's almost always black coffee. Adding milk to it turns into not-an-espresso.

Funny, I know, but coffee people do have some strict guidelines about how to make each drink. And an espresso, a true espresso, will never contain milk. Not a trace.

This doesn't mean that you're a sinner for adding a shot of milk to your espresso. Just that you're contractually obligated to not name it an espresso.

Adding sugar is fine though, however it should not be too much sugar, lest you mask the taste of a pure espresso.

Onto the latte, this drink is 75% steamed milk, and milk foam. It's a very different drink than an espresso, in that the taste of the coffee is very subdued.

So in short, if you're looking to decide between an espresso and a latte based on how easy to drink they would be for a newcomer, then a latte would be easier. The high milk content makes the coffee taste more bearable to one who isn't used to it.

That being said, since it contains no milk, an espresso will get you closer to the true coffee taste, if that's what you're after.

2. A latte has milk foam, an espresso has crema

Now let's talk about the foamy layer on top. Both latte and espresso have a foam layer on top, but their composition is drastically different.

An espresso is a shot of coffee which produces a crema, which sits on top of the coffee. This crema is the result of hot water being passed very fast through the ground coffee, and strained through a fine filter.

The coffee oils in the coffee grounds get some CO2 and they bubble up. This is what you see as the tan (sometimes brown) foam on top of the espresso.

Sometimes it's even shiny, and sometimes it may contain some larger bubbles throughout the whole layer.

A nice, creamy layer of crema should be somewhere about half a centimeter or a bit less. That's ⅕ of an inch, and anything thicker than that is a sign of using pure Robusta beans.

Robusta is famed for being extra bitter and harsh, but produces the largest amount of crema in an espresso, of all the coffee beans out there. That being said, a thick layer of crema is not necessarily the sign of a quality espresso. The crema can be tricked.

However it is a sign that the coffee used is fresh, since stale coffee won't produce as much. It's also a byproduct of coffee blooming when hot water passes through it. This is something you can see rather with Turkish coffee or the French press.

For a latte, you will need a milk foam. This is produced by steaming a small amount of milk, which will separate into hot milk, and beautiful, creamy milk foam.

You're basically making very aired, hot milk. The way the milk foam is added is half the art of a latte art. This is because if you add the milk foam wrong, you risk ruining its structure and it's going to turn into something other than a latte.

Still drinkable, but not a latte.

So, when you do add the milk foam, you'll see it mingles with the crema of the espresso. This is another part of how the latte art becomes so beautiful.

You will see distinct color separations between the milk and crema, and you'll be able to play around with shapes and flowers and hearts.

That being said, both the milk foam and the crema are delicious on their own. The crema is rather acidic, and slightly sour tasting because of the raised pH levels.

The milk foam is a beautiful, thick milk taste. Using higher fat milk will grant creamier milk foam, so try not to skimp on the fat here.

3. You need an espresso to make a latte

And we come to the hen-before-egg type question. Who came first, the latte or the espresso ?

In this case, it's very clear that the espresso came first. The espresso was the first form of coffee, before latte was made. Actually, a latte is a twist on espresso. There are several espresso-based drinks.

The earliest form of latte was probably invented 2 minutes after someone took their first sip of the first espresso and deemed it too strong.

Making a latte with anything other than an espresso will not be a true latte.

That being said, if you make a latte at home, with filter coffee but still use the same ratio of milk to coffee, you might end up with a very large drink. However the taste will be off, even if your proportions are right.

The whole point of the latte is to subdue the taste of an espresso, but still let some of it shine. Filter coffee simply isn't the same taste and flavor profile as an espresso, even if you used the exact same coffee beans, ground the same way. 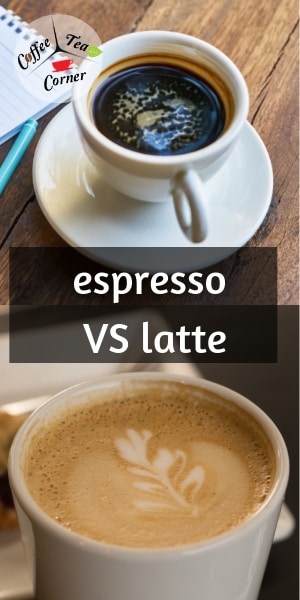 4. A latte will always be larger than a standard espresso

When it comes to the serving size of an espresso and a latte, there is a bit of a debate. Not much though, since the general consensus is that a latte is larger than a simple espresso by default.

This is because a regular espresso shot (a normale shot) is about 30 ml if pure coffee, with the crema measured as well. Ristretto is a shot of espresso with only half the water.

It's a stronger shot of espresso, and only used in some drinks. So that puts it at about 15 ml/0.5 oz of coffee.

A lungo is a shot of espresso is one where more water is left to course through the coffee grinds, and you get double the amount of water., so that's almost 60 ml/2 oz of coffee.

Now, given how a latte is meant to be, whichever way you make it, it will always end up larger than any espresso shot you can make.

A latte is supposed to be 25% espresso, 50% steamed milk, and 25% milk foam. So if you were to use a long espresso, you would get the same ratio of milk and milk foam in your latte.

This would result in a very large latte.

Do keep in mind that a latte's caffeine content will be the same as the one in an espresso. However, it will work much more slowly and possibly not as efficient, because of the sugar and fats in the drink.

Merits of both espresso and latte

There are merits to both espresso and latte, though. Even if they're very different drinks, with different purposes, they are both beautiful and tasty in their own way.

If you can, I recommend you try both drinks made by a skilled barista. Who knows, maybe after a good espresso you'll figure black coffee isn't terrible after all.

Or, you might figure that sugar and milk are actually your thing and you'd love to have them in your coffee more often. Try things out, see how you like your coffee best.

A latte is more of a comfort drink

I don't drink lattes often, mostly because I drink my coffee at home and I constantly switch between filter coffee and Turkish coffee.

But when I do drink coffee at a cafe, I tend to go for a cappuccino since I like the taste of coffee to be more pronounced.

That being said, there are days when I really do need a nice, gentle latte to sip on. It's still coffee (well, barely) and it's also easier to drink when you're feeling like enjoying a warm, milky drink.

Both a latte and an espresso are a hot drink, however it always seemed to me that the latte was the more relaxed, easygoing sister of the overly ambitious and go-getter espresso.

If you've never had coffee before, and would like to try it out, then a latte is much friendlier than an espresso. Not liking the coffee notes in a latte is a pretty clear sign you won't do well with a shot of espresso on its own either.

An espresso is a quick and efficient pick me up

If you'd very much like to be done with things and go about your business for the rest of the day, then obviously an espresso is going to be your best bet.

Short, hot, and done in 5 minutes from prepping the machine to setting the empty cup down.

Sometimes it's the speed and accessibility of an espresso that wins me over. This is the kind of drink I rarely ever sip on, or take more than a couple of minutes to drink.

That being said, I also have to admit that an espresso is what's going to get you to the closest coffee taste possible. As in, it's a black coffee, and it's a very concentrated liquor.

It's going to be a bit thicker than filter coffee, and its flavor will be very different.

An espresso will pick up on the higher notes in your coffee beans. So if you're after that, then espresso really is the one for you.

When buying new coffee, I always recommend you try making an espresso from it for the first drink. This way you can get to know the essence in its purest form.

You'll be able to adapt your brewing method from there, I think, once you understand the main notes in the espresso.

When comparing an espresso with a latte, there is no true comparison. It's a bit like comparing peaches and peach jam. They're going to be very different, and provide you with two distinct experiences that you can't really be pitted against eachother.

You drink your coffee however you like it, though. Don't try and drink only espresso because that's the 'right' thing to do. If you can't stand the taste of a straight espresso, then by all means add a bit of sugar or milk.