When you're out ordering your drink, you'll want to know the difference between a frappe and a latte. This is a confusion that happens often enough, and baristas everywhere are a bit irked by customers asking for ''hot frappe''.

Which isn't a thing, by the way.

Given how many coffee based drinks there are out there, it's no wonder people sometimes get confused. No worries though, I'll help you navigate them easy enough. 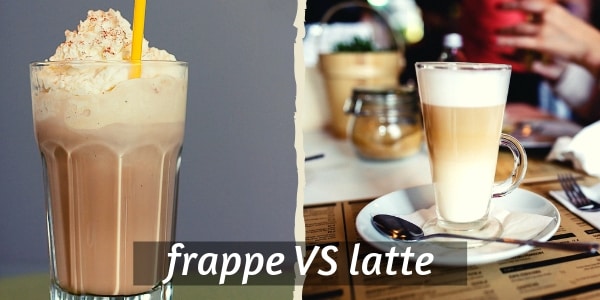 The most important differences between frappe and latte is that a frappe may contain ice cream and cream, while a latte has only steamed milk aside from coffee.

Lattes are hot (unless you ask for an iced one), while frappes are cold and have ice in them.

All in all frappes and lattes are very different, and each difference is explained in more detail below so keep reading.

1. Frappe is an iced drink, latte is a hot drink

Starting with the basics here. A frappe is a cold drink, it's actually iced. It's meant to be served in summer, but no one's stopping you from ordering one in the middle if January either.

The frappe came to be a summer drink since it was invented in a very hot place - Greece, actually - and it very quickly became a national favorite.

It even spread to neighboring countries, and is now very well known across Europe.

The latte is a hot drink, and equally loved by everyone.

It's means to be a hot drink since it used freshly brewed espresso, so it's going to need to be hot in order for it to work properly.

If you've ever meant to have an drink like a latte, but iced, then you're looking for either an iced latte, or a frappuccino. Both very popular as well.

A hot frappe cannot be made, since it's not possible to get the same texture and taste with a hot drink.

When your order a latte, you're getting espresso shots in your drink. How many shots is up to you, but the standard is one. As far as I know you can get your latte up to 3 shots of espresso.

This means your final drink will have a subtle taste with all the milk, but the espresso will shine through a bit.

You'll find the espresso as being a simpler coffee taste than French press, or filter. This is because espresso tends to pick up only the higher notes of the coffee you use, and you're missing out on the other parts of the flavor.

Still, espresso is the easiest coffee to build a drink with. Especially a hot drink.

A frappe is a bit out of the ordinary, since it uses instant coffee on purpose, not because the barista ran out of brewed coffee.

The frappe was invented at an instant coffee convention, with the purpose of making a new and exciting drink that only uses instant coffee.

And, somehow they came up with the frappe. Mostly by mistake, as many great inventions happen.

So, if you wanted to make your frappe with filter coffee or espresso, you'd be making it wrong.

The whole point of the frappe is to shake the instant coffee in a shaker with ice cubes, until foam forms. You know the thick foam we all try to make when we make a cup of instant coffee.

It looks a lot like the crema on an espresso, but in truth it's very different. And contains absolutely no coffee oils, because of the way instant coffee is made.

Alright, I know I just kind of gave you the recipe for a frappe but the fact of the matter is, a frappe has a very obscure recipe.

It absolutely needs instant coffee. It needs ice. It needs to be shaken. Add water and sugar to taste.

I've had frappes made with a scoop of vanilla ice cream.

Some have been unsweetened, and some have had sweetened cream added by the barista without me even asking.

As for the latte, it's about as specific as it gets.

You need one espresso shot, poured in first. The you need another 6 parts steamed milk, and top with milk foam. Can sometimes be domed, if the barista is feeling generous with the foam.

For every additional shot of espresso you add to your latte, you will remove 1 part of milk from the recipe.

So a double latte is 2 parts espresso, 5 parts steamed milk. Although this will get you closer to a cappuccino.

And the mandatory latte design on the top of your drink, never forget that. 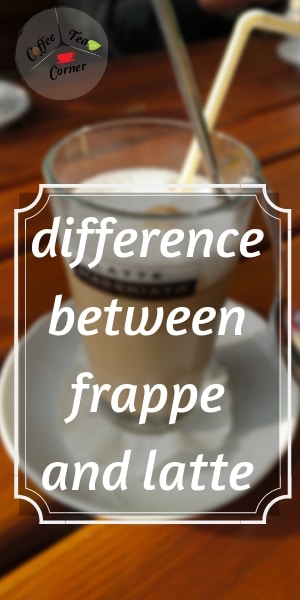 The caffeine content in these two drinks is a bit different.

For example a cup of latte uses 1 espresso shot (usually). As an average score, a shot of espresso contains about 63 mg of caffeine for 1 oz/30 ml of espresso.

This is based on the general average of 212 mg caffeine/100 ml of espresso.

So, if you use one shot of espresso in your latte, your total caffeine level will be equal to the espresso you used.

As for instant coffee, you'll find the caffeine hard to figure out.

On average, an 8 oz/236 ml instant coffee drink contains about 93 mg of caffeine. The range is 27-173 mg, depending on what kind of coffee beans were used in making the instant coffee.

Since we're going with the average figures here, we'll go ahead and notice that a latte is usually weaker than a frappe.

Again, this can all change if you add more espresso, or instant coffee.

The type of coffee beans used also matter, since Arabica-based drinks will always be weaker in taste and caffeine.

The way the recipes of these two drinks are made, it seems those of you who love milk will love latte as well.

A latte is mostly steamed milk, and milk foam. It's got a coffee taste to it alright, but it's almost overwhelmingly milky.

A frappe doesn't always use milk, so it's going to taste different as well.

This means that if you like your drink with lots of milk, or milk foam, or cream or whipped cream, or any combination of those then you're going to love the latte.

It also means that if you're lactose intolerant you're better of staying away from lattes. After all, the very name of the drink means ''milk'' in Italian.

You can add milk to your frappe, don't get me wrong.

It's just that each coffee shop prepares their frappe a bit differently, milk or no milk, whipped cream, cream, ice cream, or just water, or any combination of the above.

Mostly it's just instant coffee with water and sugar.

6. Frappes are much more bitter and earthy, lattes are subtle

In terms of taste, again the latte seems to be a more subtle one. The espresso aroma is there, yes, but it's fairly muted.

The milk takes care of all that, and it's especially so if you're using whole milk.

The more fat and protein present in your milk, the better the taste and the better it will smooth out the bitterness of an espresso.

So, your latte will have a very smooth, velvety mouthfeel. This is especially true if you make your latte at home, and go heavy on the milk foam.

As for the frappe, it's got a much darker, bitter taste.

The coffee taste is very much there, and it's even more pronounced by the fact that instant coffee is usually made with Robusta.

Robusta beans are the more caffeine-heavy, and also the harshest in taste. They do have their sweet moments, thought.

So, you frappe will be more of a strong-tasting drink. That's either good or bad, depending on what you're after.

I for one love a strong coffee taste, but I can't have my frappe without a bit of milk or ice cream, so I always take a good look at the menu.

Just as a note, even if you add milk or cream to your frappe, it's still going to taste stronger than a latte with a single espresso.

7. Lattes have latte art, frappes do not

The beautiful latte art. I know a lot of people are very impressed by it, and so am I whenever I order a cappuccino or latte.

The way the milk foam comes in touch with the crema of the espresso will make all sorts of opportunities for shapes, and it's also a measure of the barista's craft.

As in, such dedication to detail is always welcome, and in some case very sought after.

Of course, there are latte art examples that are simply beautiful, with very intricate designs made only by pouring the milk into the cup of coffee.

And then there are simpler designs, not as intricate but still a work of art on their own.

Like for example shapes dusted with cinnamon onto your drink, or swirls made out of topping. Beautiful, but not the real thing.

As for a frappe, the case is very different. There is no way to make latte art on a frappe as it can't hold hot milk foam.

However you can always find some form of embellishment in a frappe. Either with some syrup artfully smeared on the sides of the glass, or maybe something dusted on top of some whipped cream.

Lattes and frappes have a couple of similarities

All this talk of how a frappe is different from a latte, but let's talk a bit about what they do have in common.

After all, people do lump them together for a reason.

So, a frappe and a latte are very similar in color. Both are a light coffee color, with the latte almost always being lighter than the frappe.

However the frappe tends to look a bit darker, especially when compared side by side with a latte. This is because one contains milk, and one does not (usually).

There's also the fact that both drinks come in large servings, and if we're also looking at iced lattes than things really get similar.

But what you won't notice in a latte is the intense coffee scent of a frappe, whether it's iced or not.

And finally, both drinks can be easily customized with different flavors and toppings, which makes telling them apart ever harder. Still, I think the 7 points listed above should help you out.

It's always good to know the differences between the coffee drinks available out there, so you know what you're going to order.

And it's nice to have all this information, so you can accurately pick out which drinks you're going to like or not, even before you drink them.