If you're anything like me, you are friends both with chocolate and with coffee. But why do we love them so much ? They seem awfully familiar, like some sort of cousins. would this mean chocolate and coffee are related ? Their taste definitely would lead you to think so. 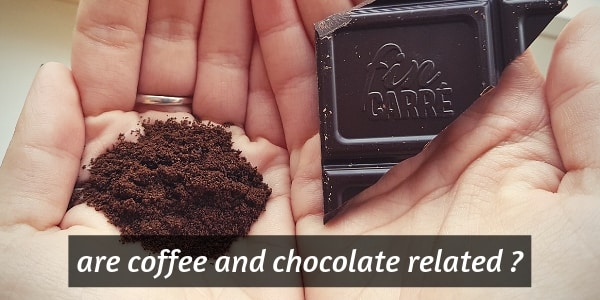 So are coffee and chocolate related ?

Originally coffee comes from Africa and Arabia (actually Ethiopia and Yemen, which are pretty much neighbors), and is now best grown in South America.

While the original finding of cocoa was in South America, and is now best grown in Africa. Kind of a switch there, but it works.

The two beans not only come from a different plant, they also serve a different purpose. Coffee is meant as a stimulant, with some antioxidants and general help to get the motor running.

Conversely, cocoa was used in ceremonies and then passed onto royalty, and much later became available to the general public. It was a premium item, and it served to flavor sweets (or be a sweet on its own). It's got many more antioxidants than the coffee bean, much less caffeine however.

About the coffee bean and its flavor

Where and how the coffee was grown will influence the look and taste of the beans.

Originally the bean is green, and needs to be rinsed off. Then the bean is roasted to various desired levels. Sometimes it stays green, sometimes it's roasted almost completely black, or anything in between

It's the roasting level that gives coffee part of its dark, rich, earthy tones. The other part is the caffeine content inside of the bean. This is also why decaf tastes blander than regular coffee.

The fact that coffee is usually ground up into small pieces (but not yet a powder) can make it easy to confuse with cocoa powder. There is a type of ground coffee that is very very finely ground, and that is the one meant for espresso. That kind of very fine coffee produces the crema needed for an espresso, and draws out the flavor nicely.

However when the coffee is processed it will always have a deep brown, sometimes reddish color. More reddish than most cocoa powders, actually. So confusing them by color and texture is not always possible.

About the cocoa bean and its flavor

The cocoa bean is a bean that most resembles pea, in a way. There are several beans in a pod, and each bean is the size or an almond. The pod itself is often larger than one human hand, so you can imagine the number of beans inside is high.

Those pods grow on the cocoa tree, and are harvested almost all year round since the tree is evergreen. The pods are then opened, the beans removed and dried or roasted, and then they can be processed. From the single bean, there is cocoa butter and cocoa powder extracted. The butter is pressed out of the seeds, much like olive oil from olive pits.

Cocoa itself is quite bitter, and has no trace of sweetness. This is because of the alkaloids naturally found in the cocoa beans. They are also found in the coffee beans.

The remaining dry bits are then very finely milled and that become the cocoa powder. There are 2 main ways of processing the cocoa pods, and the first and most common is the Dutch process. It's the one where you're left with a very reddish looking cocoa.

This is how red velvet cake came to be, by the way. Nowadays it's just food coloring, but originally it did have a reddish tint to it because of the amount of cocoa in it.

Back to Dutch processing, this process gives the cocoa powder a different color, a milder taste, less acidity, and a generally better appeal to most people. It's the one you'll find most often in sweets and baked goods, ice cream, and so on.

The second processing method is the Broma process, which doesn't treat the dried beans with an alkaline solution. This gives them a plain brown look, and a different flavor.

Mocha is a wonderful blend between coffee and chocolate

It just happens that the two go very well together. They weren't meant to go well together specifically, but it's the bitter, earthy tones of chocolate that go so well with the rich and warm tones of cocoa.

The same goes for bananas and either coffee or cocoa. It's the sweetness and complete lack of acidity of bananas that complement the other two so well. No wonder we came up with a banoffee flavor a few years back.

As for the perfect blend between coffee and chocolate, that's up to you. Each person has different tastes, and your perfect blend might be someone's reason to cry.

Still, I for one like a coffee and cocoa blend, just not on the sweet side as I find it can sometimes be overwhelming to 'understand' in terms of flavor.

Mocha is a wonderful way to blend the two, and you'll find it under various name variations and brewing variations. But the heart of it is always the same: strong coffee (usually espresso) blended with cocoa powder and some milk.

You'll find it under names such a moccacino, mochaccino, caffe mocha, mocha latte, or any other variation. But it's still coffee with hot chocolate. You can easily make it your own by adding or changing up the ratios.

For example the coffee we have at work is awful, burnt, and way too sour. I honestly think the machine is broken. The only way I found it drinkable was with a serious layer of milk foam, and a cup of hot chocolate mixed into 2 espresso shots. That too is a form of mocha, and you're perfectly welcome to try your own version.

This is one thing that coffee lovers all over the world will be happy with: there are dozens of coffee/cocoa combinations to be found, some of them can be made as gifts for coffee lovers. 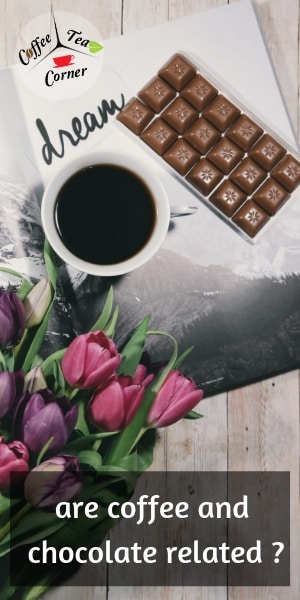 You should not add cocoa powder to your ground coffee

When you add your cocoa powder, do no add it directly to your coffee grounds. Especially in an espresso machine.

The espresso is meant to send a short burst of boiling hot water under very high pressure through a thick layer of coffee. The coffee needs to give way or else the cup holding the grounds would overflow and the machine would back up.

The same goes for filtered coffee. Drip-filer coffee is meant to have room to breathe, bubble up, and them mellow out. If you look under the top of your filter machine, where the water comes down from, you'll notice droplets of dried coffee.

That is because of how the coffee grounds bubble up and sometime a few drips fly upwards. That's normal for coffee. Cocoa would just get everywhere.

If you were to add cocoa into that filter next to the coffee grounds, like I did, you'd be left with a whole lot of water trapped between bits of coffee and cocoa, and a nasty sludge inside the paper filter. This is because of the starch content in the cocoa powder.

Turkish-style coffee would not be great with the cocoa added right with the  coffee grounds since you'll need to give it w boil or two and cocoa is not meant for that.

The French press, I think, would be better suited for this. Even there, I think the sludge would be too thick for the press. Basically don't add cocoa powder directly to the coffee making process.

If you do decide to make a cocoa and coffee blend, please remember that cocoa powder is fine. Very very fine, and it will get everywhere. It also does not melt and disappear into the water, so it's not like instant coffee where it will not leave a residue.

Instead you can and should add it to the finished coffee brew. Do expect it to change texture and become a bit thicker, since cocoa does contain some starch. I find in most of these cases sugar is not needed, or at least not as much sugar, since cocoa by itself carries a sweet flavor very far. So it would do a lot to counteract the bitterness of coffee.

I hope I did manage to help you out here. I know coffee and chocolate are not related but they certainly seem to be sometimes, no ? Especially given how well some chocolate makes have blended coffee into their chocolate makes me think that.

You know those white chocolate pralines with a cappucino filling ? Or the dark chocolate with coffee liquor filling ?

Yes, chocolate and coffee go so very well together, and I always have a bit of both laying around the house. Although I have to say I vote for dark chocolate since the milk one can often be too sweet for my taste. To each their own though, you might not like the dark one as much, and that's okay.

« Why Is My Green Tea Brown ? Here's What's Really Going On
How Long Do Coffee Beans Last ? A Word On Fresh Coffee Beans »